Pumpkin Soup with Rice and Apples 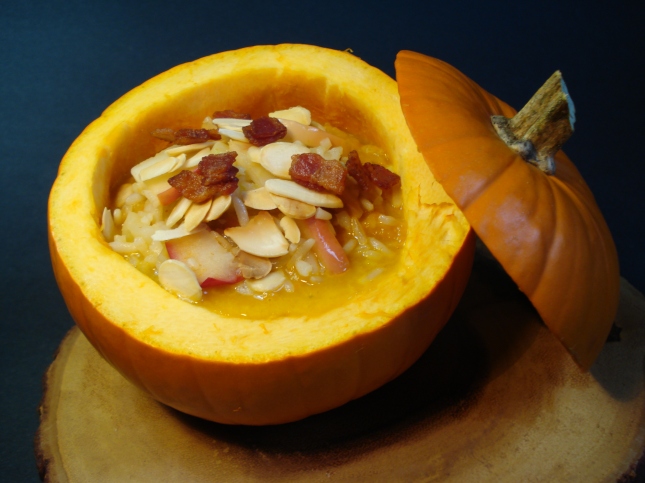 Drum Roll Please! Finally here it is my tried and true pumpkin soup recipe. Don’t let the list of ingredients or the number of steps intimidate you, this is worth every second of prep.

This recipe was published in October 2001, in one of the first Martha Stewart Living magazines that I had purchased. This particular issue had an entire section on pumpkin foods. The more I read about the different things you could do with pumpkin, the more I wanted to try this versatile food.

The first time I made this soup, it was for my sister’s birthday. Once I gathered up all the ingredients and started peeling and chopping, I realized that this soup was going to take more than just an hour to prepare. I called in some back-up (Jamie) and he took over the task of peeling the pumpkin. This has actually worked out in my favour, as that is his job every time we make this soup. This is fine by me, as that is the most difficult part about making this delicious soup 😉

So, for this first ever batch of pumpkin soup, I made it exactly as Martha had intended. It was amazing. I actually served the soup in hollowed out pie pumpkins; it makes for a pretty impressive presentation, and adds to the enjoyment of the soup. It lets your guests know how important they are to you, when you make that extra effort (WOW that really sounds like my inner-Martha coming out).

This soup has become an annual tradition in our home. When we first moved to Ottawa, we whipped up a batch and invited our friend Jeff over for dinner. (On a side note, that was the same night we told Jeff that Jamie and I were engaged and asked him to be in our wedding party). Jeff was blown away by this soup. There is nothing better than hearing praise for a meal that you have prepared for friends.

Based on this feedback from Jeff, we decided to invite even more people over the next year. This group was just a bit bigger (Jamie, Jeff, Triet and Katie). The reaction to the soup was the same, it hadn’t lost any momentum. The next year, the Pumpkin Soup Party (as it is fondly known among our friends) grew to a whopping sixteen guests. In fact, people had to bring their own bowls!

Now this year, the party has been postponed until early in the New Year. This fall Jamie and I had a few weddings to attend that, along with us preparing to move, made us push the party forward a few months, but all that means is that in 2013, we will be making this recipe twice! 🙂

I have, of course, made some modifications to the original recipe. I use brown instead of wild rice and (no surprise here) top the soup with crispy bacon. Thick vegetable soup and bacon is one of the most perfect and comforting flavour combinations.

Please enjoy this recipe and share a bowl with your friends and loved ones! Happy Thanksgiving to all our American friends!