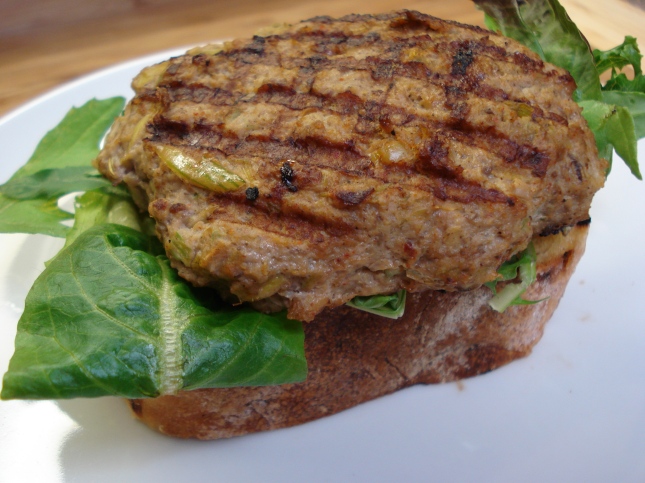 Earlier this year I was approached by Turkey Farmers of Canada and Mushrooms Canada to create two grilling recipes to be published this summer in e-cookbooks available through Facebook. The recipes would be original and combine mushrooms and turkey. I was honoured! WOW, I never would have imagined that my small blog would have been recognized in a national capacity. Once I got over the initial shock, I started to doubt myself. Could I really create two original recipes using turkey and mushrooms? I don’t even have a BBQ!  Would my creations measure up to what they are looking for? Because they were going to compensate me, I wanted to deliver a quality product, and I was worried that I would disappoint. But, Jamie told me to go for it!  Jump in with both feet and accept the offer. So, I slept on it and decided to go for it 🙂

This is the first recipe I created for the cookbooks. I wanted to do a spin on a turkey burger, and I thought that adding in sausage seasoning and mushrooms would create a delicious sausage patty for the grill. Or in my case, for the cast-iron grill pan.

When you look at the recipe, you won’t be surprised to see that I added jalapeño peppers, chili powder and cayenne pepper. I do love my food to be a bit on the spicy side 😉

I was really excited to see how easily the food processor combined all the ingredients. I wanted to blend everything together, because I know that sometimes it is difficult to get vegetables into children (and some adults). I am still amazed that I had my food processor in the cupboard for years before I decided to take it out and start to use it. Besides the stand mixer, it is definitely one of our most used kitchen appliances.

I loved being a part of this #GrillOn promotion. I met some great people! Both Canadian reps were at the Food Bloggers Conference in April. Allyson, the rep from Turkey Farmers of Canada, sat with us during dinner the first night! As the night progressed our conversation quickly turned to recipe ideas and sharing our favourite ways to serve turkey and mushrooms.

This promotion also introduced me to the world of Twitter parties!

We hosted a #GrillOn Twitter party to kick-off the release of the e-cookbooks. All of us who submitted recipes along with Allyson and Shannon, the rep for Mushrooms Canada, spent an hour discussing the promotion including recipes, grilling tips and summertime activities.  Our Twitter party was so popular that we were actually trending!

I encourage you to share your favourite way to combine turkey and mushrooms in the comments section.

Have a great Canada Day weekend!